Hi, friends. It seems that I’ve somehow (and bizarrely) become the target of a campaign of harassment and defamation by a small but loud group of “anti-CRT,” anti-vax, anti-mask, anti-trans, abusive activists.

I’m not going to spend much time defending myself from fabricated claims, but wanted to put this here for anyone who is curious.

A member of my county’s school board made a statement on social media that three books that were being protested as “pornography” were out of circulation pending review, and that they would not be returned to circulation until the review of whether or not they violated school policy was completed. I recognized the name of one of the books — George — which is a sweet story about a kid questioning their gender. I was not familiar with the other two books, but I know that queer young adult literature is often maligned as pornographic, even when it has similar themes as non-queer coming of age stories, including classics like I Know Why the Caged Bird Sings and Flowers in the Attic (which I, myself, was required to read in school).

Such books are not meant to promote pornography or pedophilia, but to capture the complex and often uncomfortable realities that many youth experience as they grow up. These books are often a lifeline for young people who experienced similar harms, who in seeing stories of people who went through similar challenges and survived might find hope that they, too, can survive. And yet, when these interactions feature queer or trans youth, they are often seen as “promoting pornography and pedophilia.” This is a result of homophobia and transphobia.

Friends, I don’t know if these people knew at the time they commented that I am, in fact, a survivor of multiple forms of violence, including trafficking in the sex trades, but this is unacceptable. Human trafficking is NOT a plot device for abusers to leverage against marginalized people and survivors when it is convenient. I replied that I am a full-time anti-violence and anti-human trafficking professional.

I made a post on my social media about how many campaigns against “pornography” are actually thinly-veiled homophobia and transphobia (see: Forever by Judy Blume, or I Know Why the Caged Bird Sings by Maya Angelou, which are not attacked in the same way).

They retaliated in an unprofessional and violent way, screenshotting pictures of my CHILDREN and posting them online, leaving my children feeling unsafe. I locked down my social media after seeing how this abuse was including and targeting children as well.

I’m not going to address laughable and absurd statements they’ve made about me. But I will share a few things about my values and work, for anyone who is curious.

It is telling about people’s true motives and strategies when they take someone else’s evidence-based and research-supported anti-violence advocacy to twist it into a narrative of being “unsafe to be around children,” a “predator,” or “vicious” (for suggesting that someone’s read of what a school board member said was actually not what was written at all). It is DARVO in action, which is a common tactic of both abusers and extremist bullies trying to claim victim status when called on their violence against others. I will not be afraid of this behavior, and you don’t have to be either.

Friends, we are better than this. When they go low, we keep doing the work. Irrelevance is the just reward for this kind of twisted attack.

Last week, I attended a presentation by a local nonprofit providing batterer intervention programs, anger management, and other classes to help domestic […]

Highlights from Twitter from today’s presentation on prevention through reducing collective violence at the 2021 Freedom Network USA conference, “Learning to Unlearn: […] 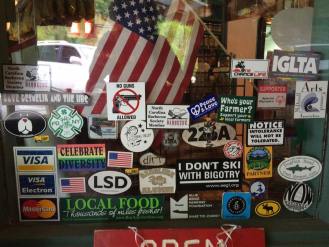 Last month, I took a dear friend on a trip to the North Carolina mountains. Throughout the trip we were sharply aware […]